This was my first trek in Himachal Pradesh with Indiahikes. Himachal Pradesh, the land of vast meadows and sky touching peaks together with the warmth of the locals makes this place a must visit during the summer months. After a lot of research and planning i had choosen this trek. A trek not much talked about and supposed to be a difficult one. The trek is graded as moderate to difficult and would be touching 15000ft, i was excited.

From Chandigarh i took a bus to Shimla. It was end of May and the heat in the plains was unbearable, therefore as the bus was meandering through the mountains and gaining altitude, the air was turning cold and fresh and landscapes were turning into greenery of the mountains. It took around 5 hrs to reach Shimla the summer capital during the British time. As the bus entered the realms of the city, i felt a sense of old world charm and modernity. Shimla has evolved from a small little town to a modern and a fast growing hill station.

Back to the trek part, We started from Shimla early in the morning, we were headed towards the Rohru district of Himachal to a small town of Janglik from where our trek would start the next day. The crossed the beautiful pabbar valley.

We reached Jhanglik around 5 pm in the evening, it is a small village at the base of Buran Ghati. It was time to meet other trekkers, people coming from different places from all over India, people coming from Jharkhand, Gujrat, Karnataka and Delhi. It was a nice mix. After the initial introduction we had a session from the trek leaders who told us about the do and don’ts during the trek period. It is very important to follow these guidelines cause nature is all powerful especially at higher altitudes and we should not try to mess with it. The most important guideline is to keep oneself hydrated during the trek period. We were also very well made aware about AMS(Acute Mountain Sickness) and how to take precautions for it not to occur, a dreaded condition which can lead to dangerous consequences. That was it, end of day one with good food and lots of people who will become good friends in the coming days.

We were supposed to hit the trail today and reach our camping site Dayara which was around 5 hours away, all excited and raring to go there was lot and energy and excitement within the group. After having our breakfast and a small brief about the trail we were on the road. As we walked past the village, there were people and children welcoming us with a Namaste(a tradtion in India to welcome a guest) and at the same time wishing us good luck for the onward journey, it felt nice and relaxing by this generous gesture of the people of this small town.

Slowly we left the village, we will be all by ourselves in the coming 5 days, no people from the outside world to interact, it will be all us and nature and the mountains for our company,we were getting some glimpses of this as nature was slowly and slowly giving us snippets of its vast magnificence. As we prodded along, to our right hand side was this huge mountain range snow clad and all pervading. The trail was moderate to easy with some steep climbs and some level walks, since it was the first day, our body was slowly and slowly breaking down and getting accustomed to climate and vegetation of the place. The images below is what were our continuous right hand side company, on the  as we moved along the path, we were getting mesmerized and at the same time awestruck by these grand vistas. Since it was day one some were getting tired pretty early but no one was complaining.

Therefore enjoying and most of all feeling relaxed we walked along chit chatting with the new found friends about life, nature and anything under the sun. Our trek guide was local village person who knew the in and out of these places and as we moved along a lot many started bombarding him with lots of questions about the place and its history. He was well equipped with all the answers and seemed like he was enjoying all this and also getting photographed.

Slowly but steadily the group moved along, taking breaks in between. Finally at our last stop which was a place with dense trees and vegetation, the guide told us we are almost there, we thought where in this dense vegetation will we find a place to camp but as we walked along and turned a corner the whole area opened up to vast greenery as one can see in the pic below.

It was a wow moment, we were all tired and this gave the right kind of adrenaline boost to our sinking energy. Everyone got out their cameras and random clicks filled the silent valley. The camp site was picturesque and blissful. We ended the day chit chatting under the stars. 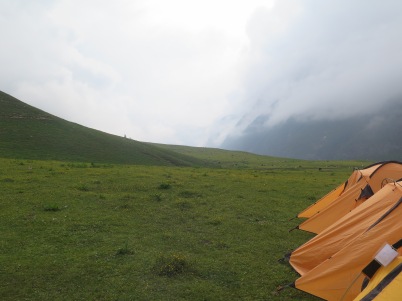 The trail for today was fairly easy,we had to walk for 3 hour and then we would be at our next campsite at Litham, it was a cloudy today which is always easy rather then dehydrating under the sun. We were walking among mist and fog which is also a different experience altogether.

The trail ended with a view of the glamorous waterfall, which was also our destination for the next day. 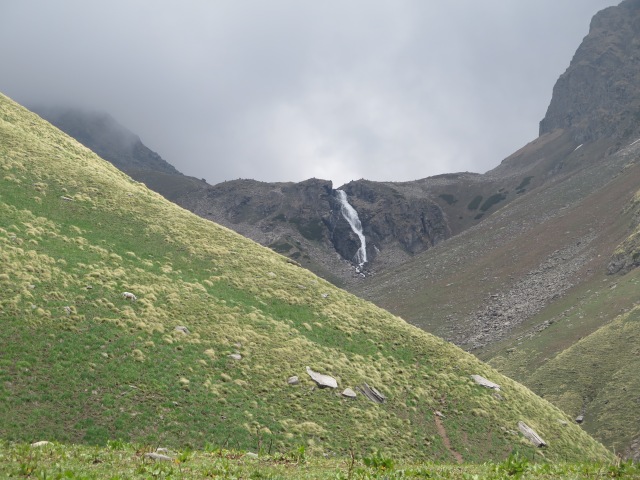 I was always inquisitive to find out how would it be to climb up the waterfall, it looked grand and inviting, we got going early in the morning, the climb was arduous, some places were quite tricky, little slips here and there, we would be straight at the valley. After a painstaking 2 hrs climb we reached the top of the waterfall, the locals said that there are seven lakes like this one after another, we did not have much time and therefore we could explore only the first 3 lakes, the water looked pure and divine, crystal clear however it was bone chillingly cold. 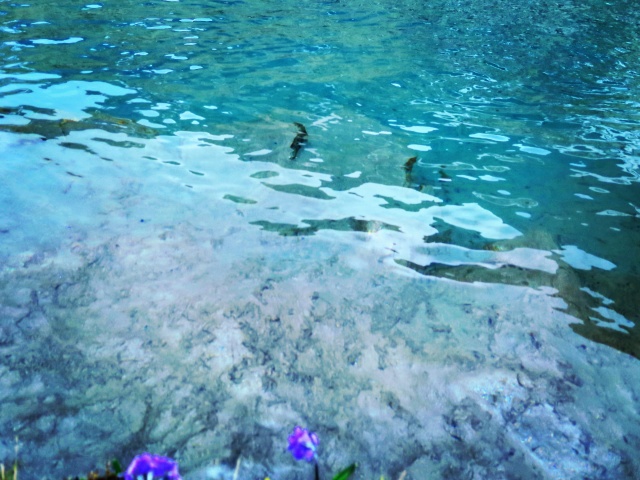 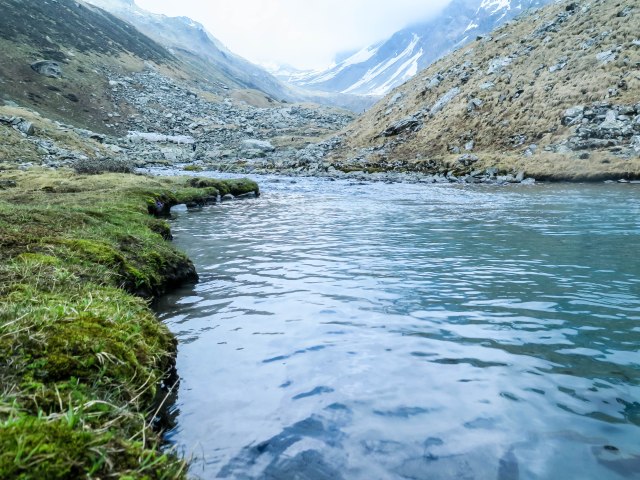 The water from these lakes feeds the waterfall at the cliff. We had been told at the start of the day that our turnaround time would be around 12 pm in the afternoon wherever we are at that time we have to start our descent. We were at lake 3 we wanted to go higher however we were short of time. Finally while coming back it started to drizzle and luckily i was quick to go down and as i entered my tent the drizzle turned into a heavy downpour. In some time all the trekkers reached the camp side safely.  It was an eventful day for me climbing up to the waterfall seeing the azure water and then descending back to the campsite in a hurry just in nick of time before it started raining heavily. All in all adventurous.

We were told that we would be starting early next day. Our mind was set for that and then something unexpected happened, there was a ferocious thunderstorm early in the morning, most of us were half asleep, we thought that the day will be gone like this only, however high in the mountains it is useless to predict nature, it is a different world out there, suddenly after a heavy downpour the sky cleared out, we were delayed for some time but not denied the chance to go to Litham,

After getting mesmerised by abundance and natural beauty we continued our journey to Dunda and around a hour and a half into the trek we saw some trekkers returning back, inquiring about what had happened they told that they could not pass Buran Ghati because of bad weather, we became disheartened and felt out of luck that may be we will also face the same fate, they wished us good luck and left, we with fingers crossed marched on.

The last bit of the trail to litham was quite strenuous, we were really drained out at the end, i was at 13,300 ft, it was cold, it was windy and i was exhausted, really exhausted, but I thought to myself I need to survive one more day and then i ll at the top, the views will be awesome and then it will be over. With these thoughts crossing my mind Dunda was more of a place to survive rather than enjoy the place.

We got up early and all set to leave, today was a exciting day, we had to rappel  down the pass, however the initial climb to the pass was quite tough it was almost a 90 degrees up climb with all rocks and snow to challenge us. However we took time but did it at the end.

I would not deny that the views of the surrounding mountains almost inspired us in every step we took to reach the top. 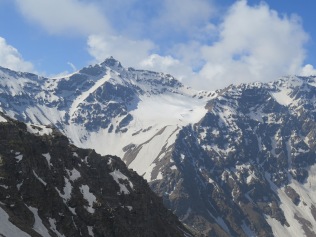 Finally we reached the top, we were at 15000 ft, we started our climb from 9300 ft on the first day, i thought to myself this doesn’t feel that good, I felt more better when i was walking the trail or climbing up here,  being on the top does not bring up any surprise and then it finally hit me that the ” Journey is more important than the destination”. Each one relished the moment, now it was time to rappel down, rope was tied near the waist and each one was slowly lowered down, it was a long drawn process and took a lot of time.

Coming down finally we landed in the kinnaur region of Himachal Pradesh, the trek was coming to an end we had to say goodbye to the beautiful surroundings, our last camp was at Munirang just before our final stop which was a small village called Baruva. To be honest i enjoyed the trails more rather than being at the top. Coming down I just hated to say goodbye to the mother nature which was my company for six days and helped me reflect on myself and my inner mechanics.